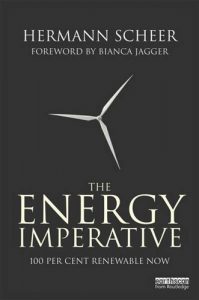 For decades, Hermann Scheer was one of the world’s leading proponents of renewable energy. In this, his last book before his death in 2010, he lays out his vision for a planet 100% powered by renewables and examines the fundamental ethical and economic imperatives for such a shift. And most importantly, he demonstrates why the time for this transition is now. In Scheer’s view, talk of “bridging technologies” such as carbon capture and storage or nuclear energy even (and perhaps especially) by environmentalists is actively damaging the more the pressing agenda of the move to 100% renewable energy. Instead, he offers up examples of the technologies which are working (economically) today and details the policy and market conditions which would allow them to flourish. In 1993, Scheer’s A Solar Manifesto laid the foundations for the road which has led to annual newly installed renewable capacity today rivalling that of conventional power sources. The Energy Imperative provides a practical, inspirational map for the next stage of the journey.

Read the foreword by Bianca Jagger

The Energy Imperative appeared a few weeks before Hermann Scheer’s death. An English translation was ordered by the Hermann Scheer Foundation. The book has been published in 2011 by Taylor & Francis Ltd.

Other books by Hermann Scheer